Notice: Undefined index: subscriber in /homepages/28/d337059024/htdocs/maspethblog_recovered/wp-content/plugins/wp-stats-dashboard/classes/util/WPSDUtils.php on line 606
 A legacy as tall as a skyscraper – News, events, food in Maspeth, Queens 
Notice: A session had already been started - ignoring session_start() in /homepages/28/d337059024/htdocs/maspethblog_recovered/wp-content/plugins/alphaomega-captcha-anti-spam/alphaomega-captcha-and-anti-spam.php on line 138 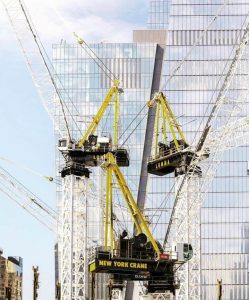 James F. Lomma was responsible for building the modern New York City. And while his untimely passing surprised all who knew him, he leaves behind an impressive life with skyscrapers as testaments to his legacy.

His life in the crane industry began as an independent truck driver when he bought his own tractor-trailer in the late 1960s. He was successful and connected with people from his native Staten Island to start a trucking company in the early 70s.

He kept expanding, buying new trucks and hiring new drivers until he was so well established he joined the Specialized Cranes and Rigging Association (SC&RA), an advocacy group for the specialized transportation, crane, and rigging industry. Lomma was a member for over 35 years and once served as its president.

Then he started to get into cranes. He first bought an 80 ton Krupp crane and completed many rigging jobs throughout New Jersey. As work increased, he bought another crane to satisfy his rigging operations. “As he got more and more into it, he got to love it,” said an employee at New York Crane.

1990 marked Lomma’s debut as a large crane mentor. That year, he bought Santora Crane, a large crane yard based in Corona, which became New York Crane. Around this time, there were just three big players in the metropolitan crane industry: Bay Crane, Cranes Inc., and New York Crane. And the jobs kept rolling in.

The largest early project was Disney’s massive 1995 screening of its newest movie Pocahontas, which saw the installation of 120,000 square feet of artificial grass illuminated by 56,000 watts of light in Central Park. Tens of thousands of people attended what The New York Times called “the biggest movie premiere in history,” with the movie playing on four 80-foot tall screens. Lomma had never been involved in such a massive project, but it encouraged him to go bigger.

Lomma then entered the tower crane business, purchasing machines that few had. From here he constructed skyscrapers throughout the City and cemented his legacy. “At one point we had a large percentage of all the tower cranes in New York City in the late 90s, early 2000s,” said New York Crane.

And when the call came to serve, James Lomma did just so.

On September 11, Lomma immediately dispatched over 70 truck loads with cranes to Ground Zero to “hopefully save some lives.” At the World Trade Center, he served as the point man and decided which cranes to bring in, because there were fears that the 1,000-ton crawler cranes would destroy the “bathtub” foundation under the site.

When it became apparent that this job would be a cleanup mission and not a recovery mission, Lomma stayed at the site for three months, day and night, until the authorities gained control of the efforts.

This made Lomma all the more proud when it was the cranes that bore his name helped to build One World Trade Center.

Among Lomma’s recent projects, there is the ongoing construction of Hudson Yards, 432 Park Avenue, and One Vanderbilt near Grand Central Terminal. Lomma also oversaw the removal of the Enterprise space shuttle from the plane that carried it into New York for permanent exhibition at the Intrepid Museum.

New York Crane remembered Lomma for being influential in the tower crane industry, since he would have to work around the parameters of New York, such as having to work with high capacity and high speeds due to the City’s restrictive construction conditions and working within a tight radius. Lomma also made sure to purchase brand new cranes and parts, not wanting to run the risk of used equipment. 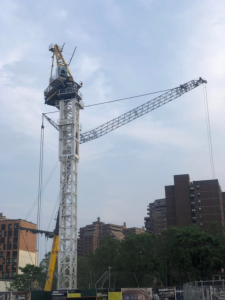 In Queens, Lomma and his cranes were responsible for helping with the projects at Shea Stadium/Citi Field, the Arthur Ashe Tennis Center, and the Kosciuszko Bridge.

As an employer, Lomma developed a reputation for being a very “down to earth guy” who was “more comfortable on the site than in the office,” New York Crane said. He was known to go to job sites personally, with scuffed shoes and coffee stains on his shirt, never wanting to appear like he flaunted his wealth.

Lomma’s hands-on approach lasted his whole life, even shortly before his death when he personally delivered necessary materials left in the office to a jobsite on a weekend.

In the community, Lomma would hire specialized local workers from Queens and Brooklyn when New York Crane moved from Corona to the Brooklyn Navy Yard to Maspeth, where it has been since 2006.

While never one to talk about it, Lomma was a large philanthropist, always donating to children’s sports programs. People who knew him would speak about the lengths Lomma would go to help friends and people in the construction industry. 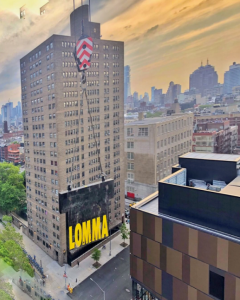 In his private life, Lomma was a lover of motorcycles, muscle cars, sportfishing, and aeronautics, even becoming a pilot and owner of planes.

While Lomma’s biggest impact will forever be felt on Manhattan, the borough he would call his lifelong home was Staten Island.

He was born on the island on November 24, 1945 to parents Anthony and Lillian Lomma. He went on to graduate from Tottenville High School before entering the crane industry. And like his parents, Lomma raised his family on Staten Island, being a devoted father who considered Sunday dinners with his family the highlight of every week.

Lomma passed in his home at age 73 on Sunday, July 14, 2019. He is survived by his children Jennifer Gabel, Lauren Lomma, and James B. Lomma; his son-in-law Steven Gabel; two grandchildren; his siblings Gail and Patrick; and nephews Jessie and Patrick Lomma.

He is buried at Resurrection Cemetery on Sharrott Avenue in Staten Island.

Without James F. Lomma, there would be no modern New York City, and when New Yorkers look up at the skyline and see cranes with the name “Lomma” written large yellow letters, they are reminded of the man whose legacy will stand tall as a skyscraper. 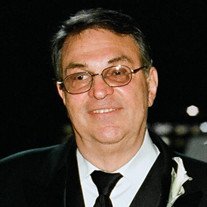 2 thoughts on “A legacy as tall as a skyscraper”