Two artificial turf baseball/softball fields and a soccer field are being installed and are well on their way to being finished as the first sign of green turf hit the ground on July 4th. 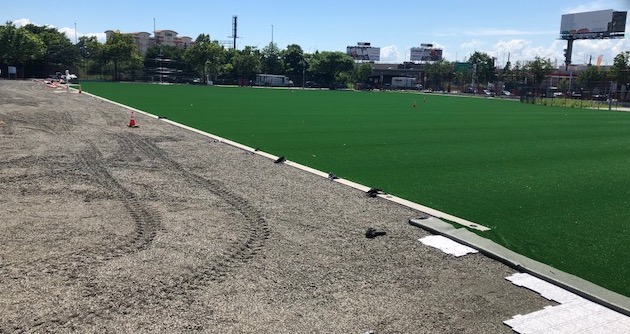 Maspeth resident Frank Principe, the former chair of Community Board #5 who was once president of the New York Concrete Industry Association, was known to have taken good care of the park across the street from his home. This park, later named for him, was one where he took great pride in making sure it got upgrades through the years. He was quite instrumental in getting competitive night lighting for the tennis courts, softball field and basketball courts. He felt that if the park were not used at night there would be trouble there. However, if lights were left on then people would use the park at night and the grounds would not fall victim to vandalism.

That thought was not embraced by everyone near the park, but lighting was put in and Maspeth reaps the benefit of a park well used after dusk.